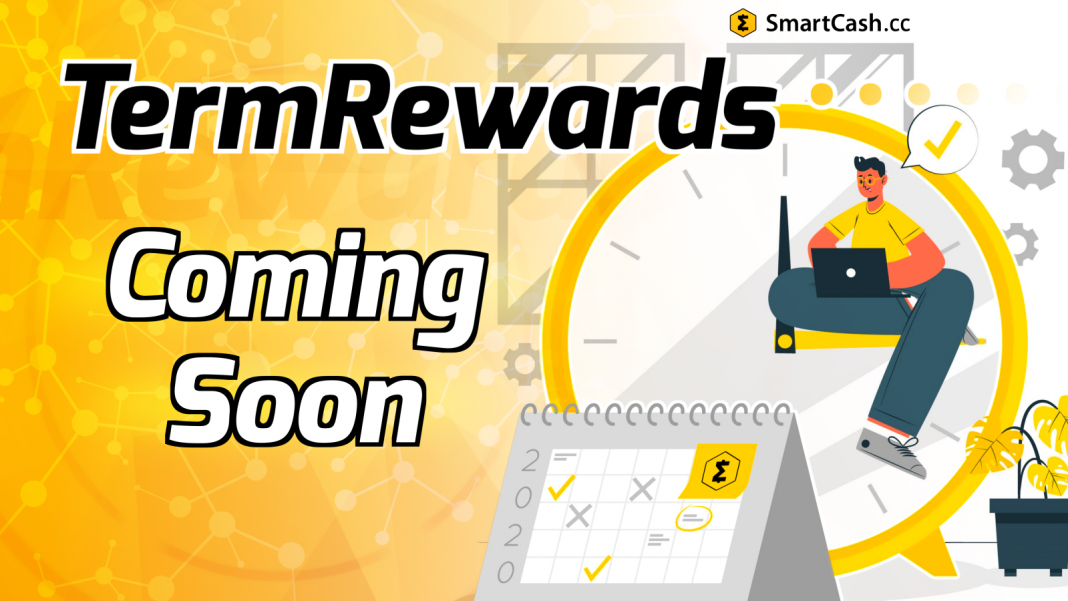 The SmartCash team is currently focused on developing TermRewards, a new type of Rewards. In addition to the updated SmartRewards and the new SuperRewards, which were introduced with the major 1.3 Phoenix release, as well as the function of time locked payments, the SmartCash team are now beginning work on a new major step in the roadmap.

TermRewards is a new milestone in the roadmap of the SmartCash team. This feature, in addition to the function of time locked payments, is designed to reward users that contribute with a long term vision and hold for periods ranging from 1 to 5 years (it will start with 2 years initially).

TermRewards will not reduce the yield of the current SmartRewards and SmartNodes, as the rewards will come directly from SmartHive.

The activation process will consist of sending a special transaction with a certain amount (the required minimum amount will be decided later). An updated node client will add some changes for sending the special transaction to activate TermRewards. The team will also work to bring this capability to the upcoming SmartHub wallet and third-party wallets in the future. For now, this feature will be available in SmartCash QT Wallet.

Recently, the SmartCash team announced on Twitter that the feature will be released early next month and will activate December 1st. Today we have an interview with Solarminer, SmartCash Lead Developer, who will tell us more details about it.

We're happy to announce the #TermRewards release is set to go live early next month and will activate December 1st.

It will reward committed long term hodlers and help stabilize the price by locking up $smart for certain periods of time.#SmartCash #crypto #cryptocurrency #DeFi pic.twitter.com/GOf0CEiAZf

Solarminer: Users will send a special transaction with a timelock transaction labeled with TermRewards. The user will be paid rewards quarterly. The payments will be unlocked, so users can spend or put them into SmartRewards to earn more.

Coinlance: What will the locking term be, will there be one term or several to choose from?

Solarminer: TermRewards will start with a 2 year locked term.

Coinlance: What are the benefits of using this feature, why is it an important step for SmartCash?

Solarminer: Users benefit from a high return in exchange for locking funds. SmartCash benefits in a similar way to a company that pays stock options where the options can be exercised at a future date, also know as the vesting date. This encourages the user to think longer term which is a big benefit when competing against other coins.

Coinlance: Will TermRewards only be available to SmartCash QT wallet users?

Solarminer: The QT wallet is currently the only want capable of sending locked transactions and will be the only way to start TermRewards.

Coinlance: When do you expect to release 1.3.4 update?

Solarminer: TermRewards will make a change to the SmartRewards database in the 1.3.4 release. We are planning to give users several weeks to upgrade. At the end of November users will be able to participate in TermRewards.

1.3.4 will be released the beginning of November.