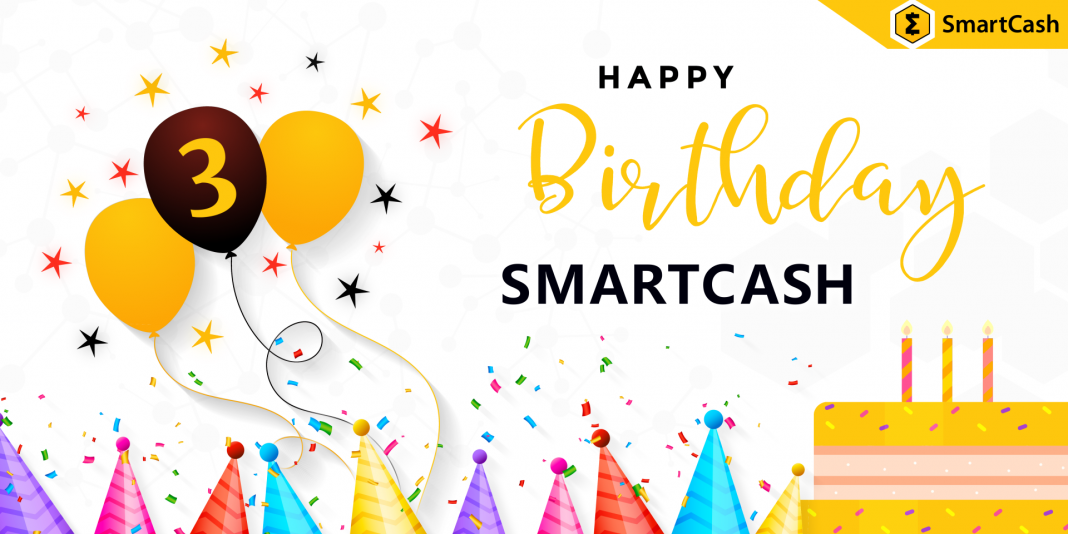 This year, July 11th, the SmartCash team and the entire SmartCash community are happy to celebrate the third anniversary! On July 11, 2017, was mined genesis block of SmartCash (SMART) cryptocurrency. Over this time a lot of work has been done – from listing on the exchanges and accepting in online and brick-and-mortar stores to increasing recognition and developing a strategy for adoption around the world.

From the very beginning, the goal of the SmartCash team was to create a cryptocurrency that would be convenient for users and sellers, who could accept payment in SMART as easily as cash. This was the main point for further evolution of the project. The project had a strong competitive advantage from the start because of the various functions and follow-up tasks as defined in the roadmap of the project. It is worth highlighting some of the most important features: SmartRewards, instant transactions, and the SmartHive governance system.

SmartRewards is a function of rewarding long-term holders of coin, with 15% of the total reward allocated to it for each mined block (Mining: 5%, SmartNodes: 10%, SmartRewards: 15%, Hive Teams: 24% , SmartHive Project Treasury: 46%) 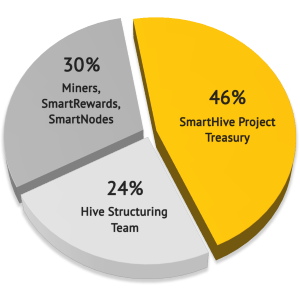 This function gave a great start to the project and put an emphasis on participation of the community which is involved in the long-term development of the project. In the new release SmartCash v1.3 Phoenix, this feature will be changed and the percentage of reward will be 60% of the block reward.

With 1.3 now in public testing phase, here are some of the cool #SmartRewards features included in this release:

1 week payouts – (that's right, you will get paid every week)

Instant transactions is a critical component of a cryptocurrency aimed at daily use cases. The InstantPay function was activated shortly after the release of SmartNodes (MasterNodes).

SmartNodes are servers that allow to perform decisions in the SmartCash network. They are necessary for the operation of instant transactions and processing of SmartRewards. This feature, in addition to rewarding long-term holders, has also provided new incentives for community members.

SmartHive is a governance system realized through a voting platform (https://vote.smartcash.cc/) and specific teams that are involved in different areas: Development, Outreach, Support and so on. Currently, more than 60 proposals have been delivered via SmartHive voting platform and more than 15 are in the process of realization right now. 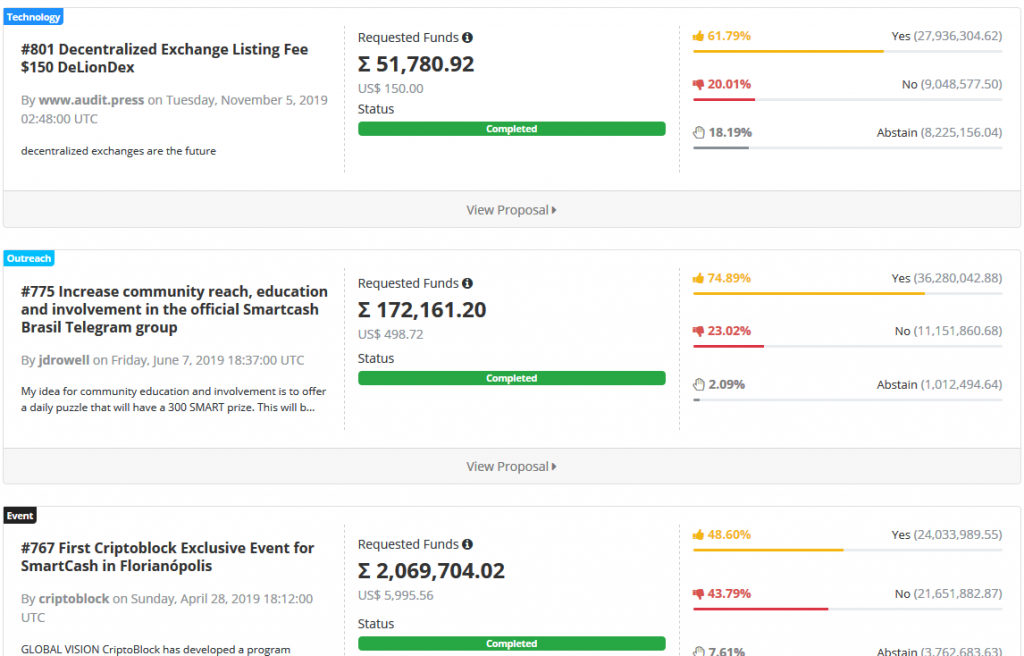 In Switzerland and Portugal users can buy SmartCash coins via Bitc.ch and Bitugax ATMs. This is the first step towards making process of buying even more accessible for cash. All GeneralBytes ATM operators can easily add SmartCash support and be listed in the list of places where users can buy SMART. SmartCash also has a merchants map, where all users can see which merchants in their country accept payment in SMART. In addition to local shops, the site lists online stores where you can make a purchase wherever you are. 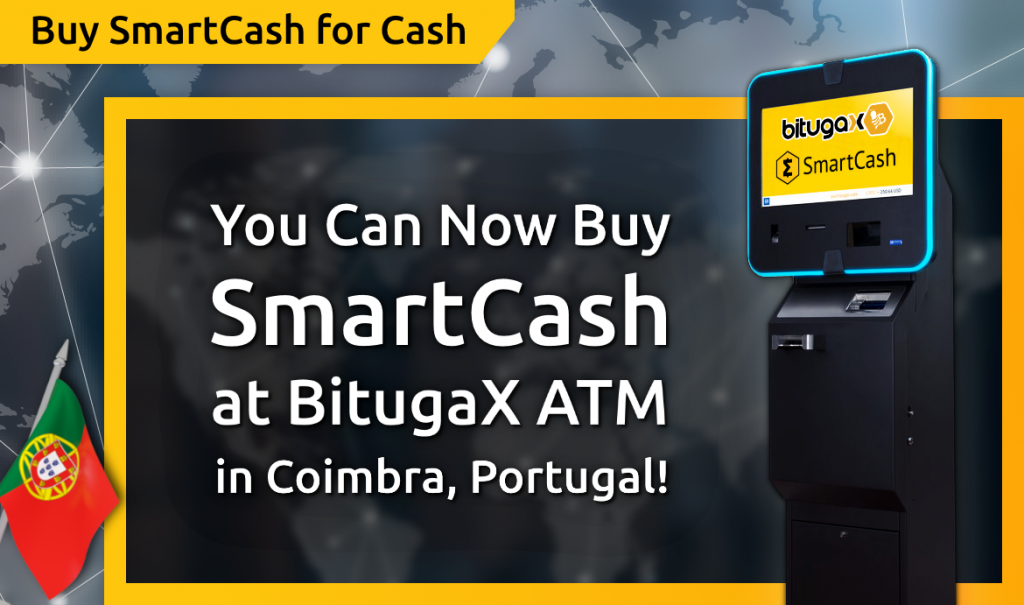 One of the features of SmartCash is the gradual halving. This means that the reward for a block decreases with each mined block. This is calculated according to the following equation:

Now SmartCash is on about 1/12th of the block rewards that were at the time of launch. Comparing to BTC that is at 1/8th the rewards at launch. Thus SmartCash is a more scarce coin, while its was launched only in 2017.

The SmartCash block reward is gradually reduced after a mined block. Less and less $smart gets produced each block.

As we can see in the charts below, the BTC reward decreases sharply once in a certain period (every 4 years). This year’s reward was reduced to 6.25 BTC. For comparison, block reward was 50 BTC when Bitcoin was just launched. 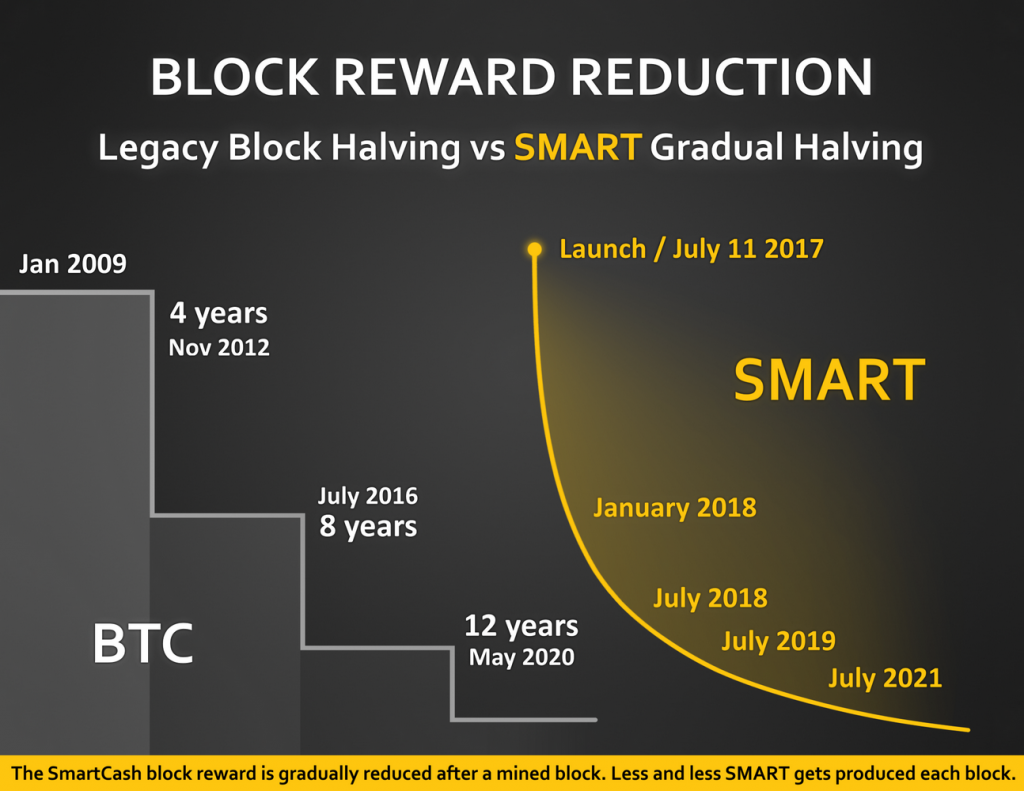 The work in progress

Now the project team is working on a major release of SmartCash v1.3 Phoenix, where will be implemented an updated feature of SmartRewards, block size will be increased to 16MB, added new address format, TimeLocked Payments and more features!. You can find more information about this release in this article on Coinlance: https://coinlance.com/2020/05/21/testnet-ver1-3-phoenix-test-try-and-engage/

We welcome all users to test the upcoming version of the wallet, which is available on GitHub: https://github.com/SmartCash/Core-Smart/releases/tag/v1.3-Testnet

Your input and feedback will be important to us!

At the moment SmartCash has a large and active community of users and enthusiasts. More than 13k followers on official Twitter account and more than 16k users on Discord SmartCash Server, where users can find all important updates and ask their questions directly to the developers. SmartCash team members include people from different countries including Brazil, France, Venezuela, Ukraine, USA and others.

SmartCash is happy to welcome all new users and volunteers who want to promote and develop the idea of fast and convenient payment in crypto all over the world and take part in popularizing the project!

The first TermRewards and SmartRetire snapshot has been successfully completed

Bitcoin Confidential invites everyone to participate in the Meme Tournament, which starts today!