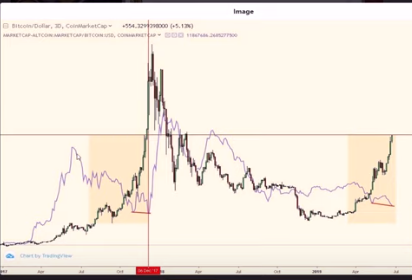 The crypto-enthusiasts of the world have now gone from trying to ignore the price of cryptocurrency to watching all day now that the price is rising again. Yes, it’s much easier to watch your savings to go up in value than it is to go down.

Bitcoin has been making a move for it and is now over 11000 USD which is somewhat signaling a rally for a bull run. In it’s past, BTC is known for rising up to crazy new highs then crashing back down to something more reasonable, but often a lot higher than it was to start to gain some stability as the market adjusts.

The cool thing about crypto is how fast things like price changes occur and how drastically they occur. It allows people who might not understand a lot how markets work to be able to learn a lot in a short time about concepts like a bull or even a bear run. Now that the price of Bitcoin just keeps going up, we’re now in the fun part of learning from markets once again.

When bitcoin goes up, so do the altcoins who have proven themselves to be worthy in the bear market generally about a month after Bitcoin makes its run as history shows. The old metaphor “the rising tide lifts all boats” has repeatedly proven true for Bitcoin in relation to altcoins over the last several years.

The big perk about altcoins is they’re generally a lot cheaper than BTC which means you can get more of them and possibly have more gains in the future if the project is a viable one with tools and features that people want.

Generally the more popular altcoins (Litecoin for example) get the raise in price first, followed by the smaller altcoins like SmartCash. When it comes to both holding and using money, SmartCash is a great option because it focuses on things like community, ease of use and speed. There are all sorts of built in features that you can use to your advantage to have even more control over your money.

So, Bitcoin rose from $3k to $12k from Dec to June which was a 4x gain. In that same time, LTC rose from $22 to $140 for over a 6x gain. The smaller altcoins like SmartCash had 100x gains in the last bull market. The future may be bright for these gems.

So if you’re looking to play around with winning some crypto gains, maybe consider investing in some worthwhile alt coins!